Since I studied Creative Writing at Middlesex University fifteen years ago I have been in several Writing and Book Groups. One of the most enterprising is the Walking Book Club set up by Number Seven Dulverton, the book and arts shop at that address in Dulverton, on Exmoor.

Two weeks ago, a day of snow and rain, a group set off from the shop for a walk up to the old hill fort above the town, observing the rule there was to be no discussion of ‘the book’ until we stopped at our destination. 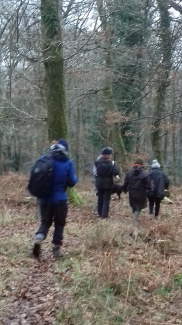 So, a little out of breath from the climb, seven of us sat on fallen boughs in the woodland to discuss pre-publication copies of “A Gentleman in Moscow” by Amor Towles, published last year in USA and in the UK earlier this month.

The book is the tale of a Russian aristocrat who returns to Moscow from Paris after the revolution, is ‘exiled’ by the party to an attic room in the Hotel Metropol, rather than his personal suite in the hotel, avoiding being put against a wall and shot, and the happenings of the next thirty plus years of his sentence and his achievements in his fascinating life.

The story is well told and persuades the reader that she or he is in the hotel with its many characters, both Russian and foreign. It is a good read, but not one that is picked up with little time to spare. If readers want to get the feeling of three decades of life after the Revolution for some in Russia, it is well worth the journey.