Amongst the many joys of living in a house that was once the heart of an Exmoor hill farm, isolated and self-sufficient, are the unexpected things from a bygone age that turn up on occasion.

Over a long period, for many months the ground was too wet to get the big digger onto the site, we have re-worked our ‘top pond’. Over the years it had silted up with the run-off from the road blocking incoming field drains. 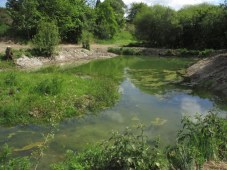 Once the digger had done its work, I have been preparing the surrounding ground using the Quad to pull my small harrow, clocking up five miles round and round the pond, to work the bare, 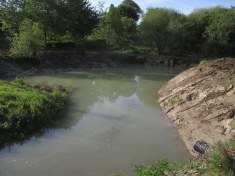 and dusty, earth for wildflower seeding. As a consequence a huge number of stones have been brought to the surface. I have collected a trailer load – where are those stone-picking Victorian school children when you need them?

One of the ‘stones’ I collected was triangular in shape. On closer examination after chipping away the dense earth attached, it turned out to be a long-lost, surely Victorian, iron plough shear. On another occasion, we found the closing hook from an old broken-down gate lying half buried, a prime example of the local blacksmith’s work, beaten out from a single length of metal.

Also, still fitted on a larder door, there was a metal latch hand made on an anvil, as were the many horseshoes we’ve unearthed. The ‘pruning hook’, perhaps more a sickle, 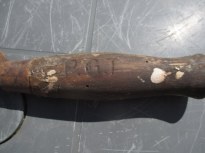 was my father’s and dates from the 1930s bearing his initials, PGT, burned onto the handle as he did with many of his working tools.

All these things tell a story, each is their own notebook, the equivalent of the notebooks all writers must have with them as they go about their day, noting down maybe only a word, a single sentence or more, that one day can be worked into a piece of writing. 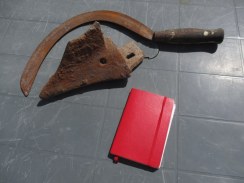 Over the years the notebooks accumulate, their jottings within being a seedbed of ideas for writing, maybe only a paragraph of fiction, or memorabilia, perhaps a verse of poetry. And some of those notebook seedlings will later prosper as the trigger of a short story, a novel or a script.

Like Loading...
This entry was posted in Uncategorized and tagged Notebooks, plough shears, Ponds, Pruning hooks. Bookmark the permalink.