I can’t let May 2017 pass by without mentioning, again, the House Martins that have flown back to Fordhollow. How many of these are from last year’s brood (or broods, we think there were two hatched from the one nest)? we cannot know. Today there are a great number here flying up to the eaves of the house and building nests. They must carry a lot of mud as the nests build rapidly, in a couple of days, and the door and windows below are splattered with mud where vital material has dropped before its intended destination.

The abundance of House Martins nesting on the house was a good reason why we moved here twenty-three years ago. 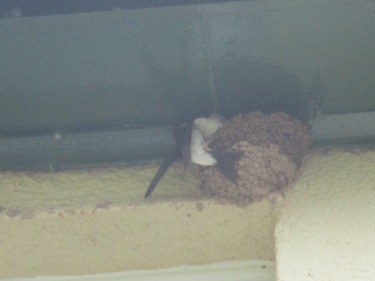 Not the sole reason, but a significant attraction. For several years we enjoyed their return each May, then numbers declined, in part because our abundance of sparrows fought off the new arrivals breaking the old and new nests. For two or three years we had no House Martins here at Fordhollow although they were in the area.

Now we are rewarded. This May the House Martins are back in good numbers – so far we have two, out of four, artificial nest occupied, five new nest built with another on the way, and, unexpectedly, 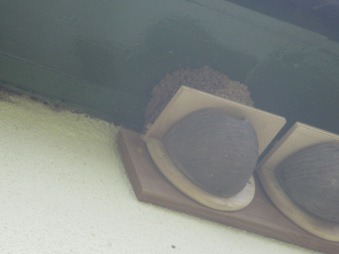 We are woken every fine spring morning by the glorious acrobatics of the hard working House Martins adding to their ‘adobe’ structures and showing the first signs of breeding. You might expect them to rest after their journey from Africa; no, they are at once setting up to produce another generation.

They are most welcome.