The winter months are passing, or we thought they were until March’s snow interruptions, two weekends apart. 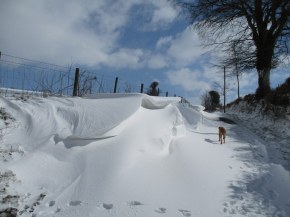 Unusual snow that was so fine you didn’t feel it was amounting to much until you realised it was a full cover, accumulating then drifting in the sharp east wind. Not the worst snow we have had here in twenty-four years, but it had its moments.

In this household we are fortunate that we don’t have to go out other than walking in the field with the dog. Driving out was not possible anyway although our neighbour soon had the lane passable, essential for him as his cows have started calving in the cattle sheds.

So, these have been days of reading and writing. The former – Frederick Forsyth’s THE DECEIVER, a fascinating read set in the world of espionage, a relevant insight into current events in Salisbury, Joel Dicker’s THE BALTIMORE BOYS, not so good a tale as his first: THE TRUTH ABOUT THE HARRY QUEBERT AFFAIR and A WHOLE LIFE by Robert Seethaler, this is what it says in the title, the self-sufficient life story of a boy into manhood whose only excursion outside his Alps valley is to fight on the Nazi Eastern front and years as a Russian prisoner until he takes a bus trip to the nearest town and back the week before he dies. It is a wonderful, almost fairy, story. Now I am reading the much missed, Helen Dunmore’s final novel BIRDCAGE WALK, said, on the cover, to be her finest novel. I’m not sure, but I may think so by the time I have finished. It conveys a wonderful sense of place and time – Bristol in the 1790s.

And writing? There are many competitions, short story and novel, open at this season. I find the challenge of these competitions a good writing boost setting deadlines and targets, even if, the work done is not submitted. I have a number of files active on the laptop, some will be submitted.

On the competition front I had success with my play: A PLACE OF REFUGE. The New Forest Players are celebrating their 90th anniversary this summer. My play, with others, will be performed on three nights at the end of July.

Back to the snow.

It is interesting to see what tracks are left overnight. Fox, deer (probably Roe Deer), a squirrel,

rabbits have all been evident with many birds. I like the pheasant tracks, their three-toed print leaving an arrow pointing the way they have come rather than where they are bound.

Like Loading...
This entry was posted in Animal Tracks, Birdcage Walk by Helen Dunmore, Books, Uncategorized, Writing. Bookmark the permalink.