Or is it summer? Two months have passed since the last posting, eight weeks, from March snow and April rain, a lot of it more than 20 inches in the two months combined here at Fordhollow, to May sunshine. Now, on the edge of Exmoor at One thousand feet above sea level the crab apple blossom is blooming giving promise to a bumper autumn crop.

But no House Martins have returned from their migration. We said goodbye to our Flock (should I say Flight?), some eight broods, our best breeding success from the nests on our eaves for several years, at the end of August last year. What has interfered? The cold weather extended over Europe in March will have been a major factor leading at worst to fatalities, at best to diversion to other places although that is unlikely. Two weeks ago, there were two Martins overhead the house, but they continued on their way. So now in the second half of May the nests are unrepaired and empty. The lack of House Martins is very sad. 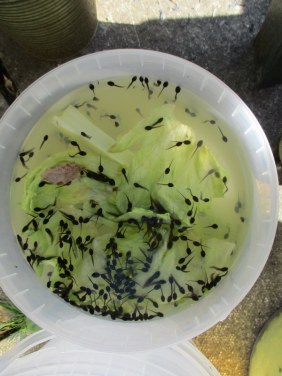 On a happier note on the bird front we have a pair of Swallows nesting in a barn and the Chiff Chaff arrived back on time. Also the huge number of tadpoles, the picture is only a tenth of them, that came from the frogspawn we rescued from the drained pond – it looked frozen and lifeless when collected – have thrived (on Little Gem lettuce leaves and fish flakes) and, in consultation with the powers that be, have been released into Wimbleball Lake; our stream flows into Wimbleball two miles away.

On the writing front I have been progressing short stories and two novel synopses entered into writing competitions. Work in progress is on my novel The Register of Joe’s Trees and I won a playwriting competition to celebrate Ninety years of the New Forest Players to be performed in July.

Here’s a Haiku written while the sparrows were nest building:

Swirling round in springtime air

Lining for a nest